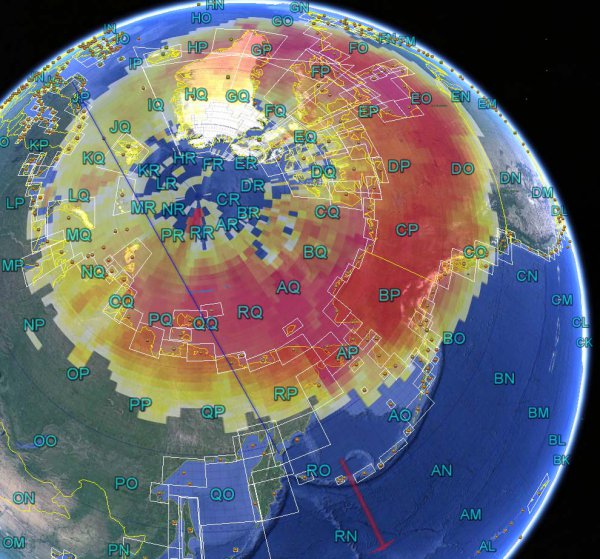 On July 11th, I worked TA0/DF8DX on 20M CW from iota AS-201. This was a new iota for me, and everyone else. Since 11 new iota's was added to the list in July, it didn't take long for one of them to be activated. Read about the additions here.

On July 19th, I worked LA4YGA on 6M jt6m from JO37 for a new grid. I have missed this grid several times during the years. It is not an easy grid to work, since an expedition is needed. The right propagation must be present at the same time, and I believe this contact was done via tropo.

On August 22nd, I worked RK3DZJ/1 on 30M CW from iota EU-082. He had a nice and strong signal, but very few takers. Perhaps he had bad propagation up north. YP0F was worked on 20M CW from EU-191. This was a new iota for me, and the third one I worked of the eleven added back in July.

On August 27th, I worked VK5CE/8 on 20M SSB from OC-173. This was a new iota, and the third new iota Craig has given me. Read about his trip here. Thank you very much for the activation, and good luck with the VK6ISL OC-294 expedition. I hope I'll work you from that island too.

I did try to work Craig on August 26th, but he just could not hear me. He had very few takers at the time. In the afternoon, his signal had picked up a lot, but so had the callers. I had no chance getting through that mess.

On August 29th, I worked RI0X on 40M CW from AS-064. I had been looking for them several days, but not having much luck. They were mostly on the low bands, where we didn't have propagation. The conditions didn't play along either, with the GMF being active. I did hear them weak on 20M CW at one point, but no chance for qso.

Because of this, I was quite surprised to hear them with a good signal on 40M. It was still daylight here at 1659z, and I think they were starting to enter twilight at their side. What surprised me even more, was that they called alot with very few takers. Listen to the signal below.

On August 30th, RI0X were on 20M CW in the morning with quite a nice signal. You could clearly hear the polarflutter when the signal passed through the aurora oval. If you look at the screenshot taken on August 29th, I have tried to mark the path from RI0X to me.

Google Earth is nice for making plots of qsoes.