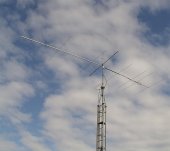 Last weekend I finally put the final touches to my new antenna project. With big help from LA7HJA, we raised the tower in the evening on May 30th. I exchanged my old 4 element yagi on 6M for a much bigger 7 element M2 6M7JHV. It is now about 10-11M above ground. Conditions on the other hand, was worse. Local tests with antenna seemed to indicate that it is working good.

On June 5th, things really started happening on 6M. In the evening the band opened to most of Europe. I didn’t really bother to work many stations, mostly looking for new or more exotic things. Many EA8 stations were heard, but only bother to work a few. I worked EA8YT and EA8BPX on SSB. EA8/HB9ZY called me when I called CQ on CW. He didn’t give grid, but gave qth as Lanzarote. Does anyone know his grid? EA8BLL also called with a nice signal. OH5LID was out on one of his many trips. This time qrv from KP54. I got him pretty quickly on JT6M for a new grid (#524 6M). Janne had a nice signal and was in for most of the periods.

On Saturday, June 6th, the band was slow to open, so I went gridhunting again. I managed to work SM2A in KP04 (#525 6M) and OH8UV in KP34 (#526 6M). I worked them both on MS CW. A few hours later, the band started to come alive. CT3HF was suddenly coming in on CW. After a few calls, he was worked for a new CW country on 6M. The band opened more in the direction to EA and CT. I worked a few of those, but nothing new. Then John ZB2EO was coming in, so I gave him a quick call. ZB is quite rare here on 6M, so always nice to hear them. I took a break for a few hours, only to find out the band opened to southeast. I heard JY4NE, but didn’t work him. He was pretty weak then. SV9CVY Mike were coming in with heavy qsb up and down all the time. I worked him on SSB. HV0A was in on SSB. I gave him a quick call when he had no takers. That pretty much sums it up so far.