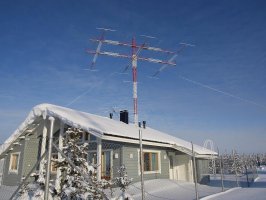 It was late January when I got the chance to join LB3HC Marius and a few other guys to work the ARRL contest from Radio Arcala OH8X. After clearing with my work that I could get a few days off, tickets were ordered and everything was set.

On Thursday February 18th, I was picked up at the Oulu airport. We arrived at the station after about 40 minutes. It almost felt like we were in the middle of nowhere. The last part we drove, were on long straight roads with no houses in sight. And suddenly, we took off into the forest. Since it was late in the evening, it was all dark, so all I could see were some red light up in the two highest towers. I could only imagine how things would look like in daylight. The weather was quite cold with temperatures around -30C, luckily it was nice and warm inside.

OH8NC Juha, LB3HC Marius and LA6FJA Stein Roar was already there. LB3HC arrived on Wednesday, and LA6FJA had arrived earlier that day. OH7EA Antti were set to arrive on Friday. After getting a quick tour of the cabin it was time to check out the shack. It was very tidy and nice built up. Tower rotating was easy with touchscreen control. You just had to touch the tower you wanted to turn and choose on a map where it should beam into. As for choosing antennas to work with, it was done automatically. 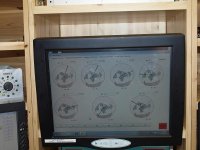 You only had to choose which stack to transmit and/or listen to. The system is very professional built up. You can choose from one or more towers to use at the same time. That way you can for instance transmit in two directions and only listen in one.

A bit later, I had to try out the station. The software we were going to use was Win-Test. Since I haven't used it before, I had to practice a little bit. As I know that OH8X often have those late night openings to the US, I hit 20M CW. After about 20 minutes and 25qsoes, I went to 40M, but I couldn't really get a good run here either. I guess OH isn't that rare. I went back to 20M, were I heard KP2/K3TEJ and V31GA with an auroral sound. I worked both of them. I then went to 80M CW to try the 5 element. I heard HS0ZEE strong and worked him easy. BA8BA came back nice and strong on my CQ. I worked a handful of stations and among them were FG5FR and J38JO with strong signals. After a quick visit to 40M were I worked C6APG, I found that 20M was still open. Getting few takers, I went to bed. I was a bit tired, and sleep is always good.

The next morning I wanted to check out 15M. I heard several stations, and started cqing. I worked several JA's, ZL, VK, BY and 5Z0H. On 40M I worked 6Y1LZ. I couldn't get a run on 40M, so I checked 20M. Bill 5W0OU was there cqing away. The signal wasn't that strong, but I broke the pile-up. I continued on 20M and a few hours later I went to 40M. I worked almost 200 qsoes before the contest with the OH8X call. I can tell you, that with a system like this, you are sure to get spoiled. Breaking a few pile-up's were easy, and it was nice to be a big-gun for a change. 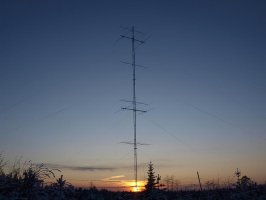 LA6FJA and I were set up to work the same 9 hour pass, so we got a few hours of sleep in the evening. When I woke, OH7EA had arrived. The crew were now complete and we were ready for the contest.

We hit the airwaves as the contest started. The run weren't that excellent, but qsoes kept filling up the log. The run got slower and slower during the night and when our pass was over, LB3HC and OH7EA took over. We were on a 9 hour rotating shift until the last night. Conditions were a bit up and down most of the weekend. 20M didn't have that long haul late night opening to the US the first night. The second night, it was much better. 15M was quite good on Saturday, but even better on Sunday. 15M never really closed until around 21z on Sunday. The band was quite amazing long after dark with plenty of KH6 stations coming through, and even TX4T. OH7EA gave them a call. 20M turned out to be our moneyband with 40M in second and 15M on third. 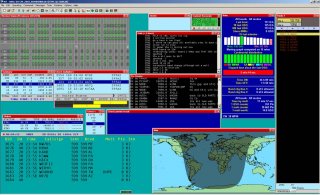 On Sunday night, we never left 20M, and worked it till the end. There were a few hours with very slow rates on Sunday morning were we had autocq on both radioes with no reply. At some point, it almost felt like we emptied out 40M. We got spotted several times, but no callers. All in all it was great to run the contest from this superstation. We broke the Finnish Multi2 record by about 1.7 million points and our claimed score is 2.7 million.

I would like to thank Juha OH8NC and Veijo OH6KN for their hospitality and letting us use the OH8X station. I would also like to thank Marius LB3HC for making this possible and thanks goes to the rest of the team; LA6FJA and OH7EA for a great weekend.

The set up of OH8X is incredible! Nice article, Andy and beautiful pictures!

Thank you Robert. Yes, it’s an amazing station. It’s just something we can dream about here. I’m happy I had a chance to visit and work from OH8X. Take care and good DX Robert.
Andreas, LA8AJA.