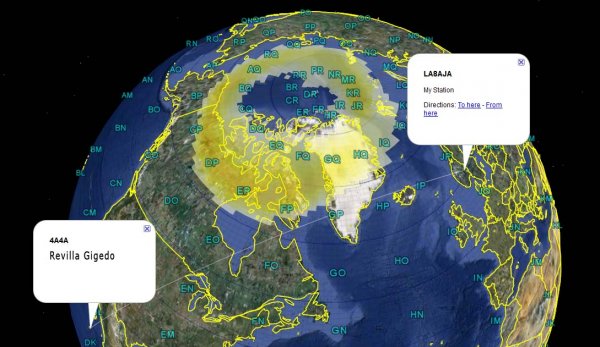 The sun has finally started to wake up again. But unfortunately, more sun activity, means more aurora up where I live. That means that the HF bands can pretty much black out for a little while and also make contacts to some parts of the world very difficult. 4A4A is active now from Revilla Gigedo and to work them, means that we need to beam 306 degrees from here and cross the outskirts of the aurora oval. I have yet to hear them with a decent signal. If I can't hear them, I can't work them. I don't like to admit it, but it seems like I'll miss this all-time new one.

We had a small aurora on March 7th where I only worked 4 stations on 6M.

March 10th also had a nice aurora and 6M NAC. I only worked 2 contacts in this opening. I couldn't hear much new and I didn't have time to play around too much.

March 11th gave yet another aurora. TF3ML was calling on SSB. He wasn't quite as garbled as aurora usually is, but he peaked at 330 deg not 300 deg. I guess it was a mixture of aurora and auroral-e. I worked him easily. Totally I worked 14 stations in this opening and 7 of them were new stations. I also worked GI4OWA on aurora. That is only my second 6M aurora contact with GI and the last one was made in 2001 with GI0OTC. I worked TF, LA, GI, G, GM, DL, SM and OH in this opening.