On July 29th, 6M suddenly opened to North America. This time I got a shot at trying out the new FT8 mode.

The opening was quite widespread as can be seen on the pictures from Pskreporter. It was fun to try out the new mode, and the shorter periods made it possible to use shorter time to work stations. I did struggle with the decode several times. I don’t know why, as the signal was audible and strong. It might have been qsb, the time might have been off, or it could have been related to the mode being in beta at that time. 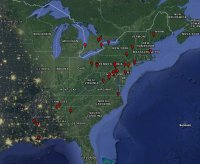