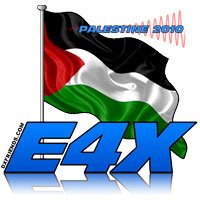 After the aurora on Saturday, I thought the band would take some time to pick up again. Well, I was wrong. A few hours after the big aurora, KP4EIT suddenly came through and I quickly worked him. Nothing else from that area was worked. I tried to call, but didn't get any real dx, though CU2JT answered my call. It was nice to finally work Gary on 6M. EI, GW and G was also worked and then suddenly an hour or so later, CU1EZ was heard and worked. CU1EZ is in HM76, and it was a new grid.

On Sunday, I noticed E4X being spotted on 6M and having a path to northern Europe. After monitoring and calling a few times when E4X was audible, he suddenly came up. I logged him as second or third LA station on 6M. That was #125 on 6M. In the evening, the northern path opened again. All JW beacons were booming in. LA5TFA/P in KP09 and TF8GX in HP84 was worked. OX3KQ was on but I couldn't read him. I only heard some weak signal.

On Monday, the northern path opened again and the JW beacons were heard once again. The path also moved a bit more to the north-east and east and I worked several OH-stations. One new grid was worked with OH9RG in KP25. A few hours later, the path had changed to a more north-western path. OX3KQ was suddenly in strong and I gave him a quick call. The path was holding up and moved more to the south. YV4DYJ was suddenly in on 50110. I gave him a call and got a new grid with FK50. It was his first LA station. FM5AA in FK94 was worked in CW a few minutes later.

Well done! From here in Brooklyn, NY, the pileups I heard for E4X were deep and impressive. My station is very modest, but I did manage to get into the log on 30m CW. That was enough for me as I grow too impatient with big pileups.

Thanks for stopping by. Congratulations with your E4X QSO. It’s way more difficult from your part of the world. Here it is quite easy in comparison. We just have to beat the southern EU-wall. I heard them on 10M, but I couldn’t break the pile-up. 6M was great fun, and I heard them plenty of times after the first 6M qso.