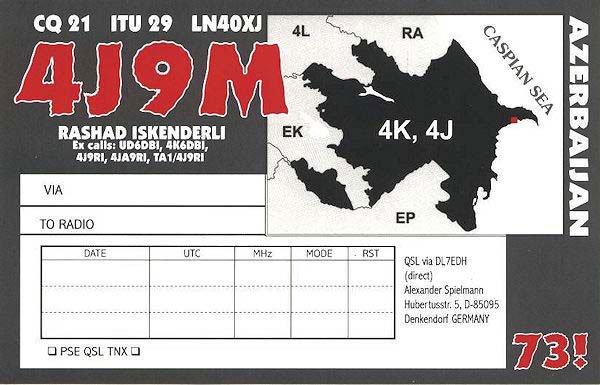 On June 7th, 6M was open to the east with very strong signals from the tv-transmittes on 49MHz. Not much interesting was heard, but the band suddenly opened to the northwest and I worked N1BUG, W1JJ And K1TOL. I turned east again and finally got ES4SA in KO49 for a new grid. Then suddenly 4J9M was on and I got him for a new one on 6M. That was #126 on 6M. The tv-qrm continued for a long time giving me S9 with inband qrm. A few hours later I suddenly noticed a N0KE spot. I tuned down and heard a strong station. I thought this couldn't be him, but it was and he was worked easily. That was a new state and grid on 6M. N0KE is in DM69 which is in Colorado. No more US stations was worked here. WP2B was in several times and I worked him on CW. I worked him last year on SSB. GM0KZG/MM from IP70 was worked for a new grid. VE2XK was suddenly in from FN07. He was worked for a new grid. This was his first opening to Norway, and he worked LA7HJA first, then me a few minutes later. KP4EIT was worked as the last contact that day.

Thanks for the audio recording Andy.
That’s realy great after near 6 years on 6M to finaly get the path to you ,
to Sweden and Finland on the same opening.
Great website , like a pro !!!
Best 73’s

Thanks for the contact and a new grid on 6M. FN07 was a new grid for me. These openings are quite rare. Glad you liked the soundclip.

Always nice to hear what the signal sounds like from the other end.

Thanks for posting the sound bite.

Yeah it sure is. Nice to work you again this year and thanks for the new one you gave me last year on 6M.