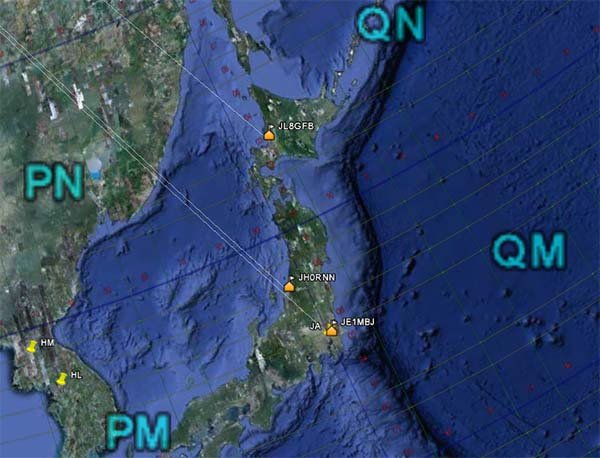 It was late Wednesday evening June 22nd. I couldn't sleep and I had to go to the toilet. Being a 6M-maniac, I had to check if something was happening on the band before I went back to bed. Right away I knew I had to turn on the radio. I was seeing a path open from Europe to Japan. When I got on the radio, I was hearing inband TV, but no signals. After tuning the band up and down for a while, I started hearing JL8GFB. I tried to call, but I couldn't make it. JH7MSB was in too, but he only continued his cq. JH0RNN was spotted and I could hear him, but no luck there either. I alerted LA7HJA and he started to listen. He got through to JH0RNN. A few minutes later, I managed to work JH0RNN for a new grid. JE1BMJ started cqing. I could hear him weak and after a few minutes, he came up and we managed a qso. That was a new gridsquare and a new field. LA7HJA was calling for Japan on 50085, and had a small pile-up going. I could hear several of the stations weakly, but he has a much better take-off that way and I never could get any reply on my cqing. After LA7HJA worked JL8GFB, JL8GFB started calling again. After a few minutes, he came up too and we finally made it. That too was another new gridsquare and field. I managed to work only JH0RNN, JE1BMJ and JL8GFB in this opening. LA7HJA managed 12 qsoes. OY, OZ, EI, SM, G, GM, PA and OH had this special nighttime opening.

I did hear VE8BY/b, but no stations that way. OZ/SM/SP/LA were heard on backscatter and EI was probably in direct. OH9SIX/b and JW9SIX/b were in from time to time too.

Another very special qso I have to mention, was the one where JL8GFB worked VE1PZ, both of them were beaming to Europe. Yet again 6M shows it's magic.

Andy, thanks for the QSO and and audio file. It is not many times I can hear my signal received at DX side. If I find your audio in my tape I will send a file to you. I thought I have worked with you but it was the first time. My first LA was LA2WKA (JP50IR) on Nov. 2001 and LA8AV (JO49RT) on Feb. 2002. I think you are new field for me.

I am happy to work with many Europeans, North Americans and Middle East Asians on this July, with many new entities as well.

Thank you too. It was quite exciting to be a part of this special opening, and you gave me a new field and grid on 6M. Hopefully this was the first of many 6M contacts.