Another weekend, another RTTY Contest 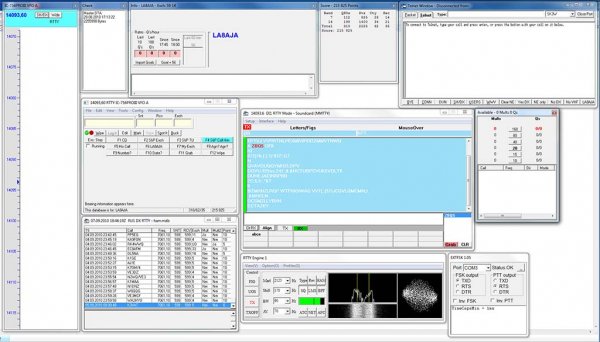 I noticed another RTTY contest coming up this weekend. After working SCC And SARTG, 100 RTTY DXCC's on LoTW was reached. I still had several states left to go, so I thought why not.

Early Saturday morning, I couldn't fall back to sleep, so I decided to go on 40M and start running. The first station was W7MRC in WA with a nice signal. Conditions had to be pretty good. I continued running and 4L, UN, YV, VE, PY, EA8 and plenty of W stations called in. I also got HI3TEJ with a nice signal.

I went to 20M after 40M didn't bring much. The second call was AL9A in Alaska. I only have one other station from Alaska on RTTY, so this was a nice surprise. I continued running for several hours with mostly Europeans calling in, with a few DX stations like YV, VE, VK, JA and plenty of W's.

I never bothered with 15M and ended the contest on 40M. Signals from stateside were quite strong at the end of the contest, so it was a pity the contest was over.

All in all, I worked GA and KS for two new RTTY states which makes my total 39. Totally I worked a few over 300 qsoes in this one. I wonder how many I could have worked if I had worked the full 24 hours. As always, I'm just a casual contester and doing this for fun.