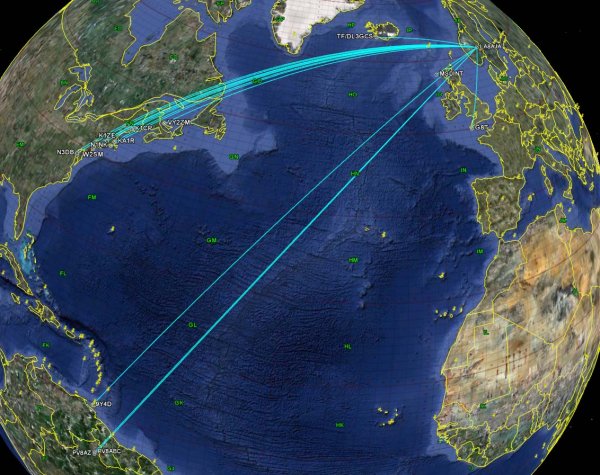 I haven't worked any 6M qsoes since June 13th. The conditions just haven't been there. At least no good conditions. This changed yesterday. The band was open to many places in Europe, but I couldn't hear anything interesting. I was then alerted by LA8HGA that MS0INT was active in IO57. That was a new grid for me, but I didn't hear him. After listening to the frequency for a while, suddenly he was calling CQ with a strong signal. IO57 and EU-059 were both new. The island was St. Kilda. A few minutes later, I worked G8T in IN79. That is a pretty rare grid as well and I've only worked it once before. Those two qsoes were worked around 15z.

The band was more or less open the rest of the day, but it wasn't until around 20z that something interesting was finally heard up here. PV8ABC in FJ92 was calling cq on 50110. I finally got the skip and worked him. That was a new grid and my first PY since PY5CC was worked in 2000. PV8AZ was also on frequency and I got him too. Almost an hour later, 9Y4D was worked with a good signal. Nothing new, but a nice dx anyhow. 10 minutes later, VY2ZM finally came out of the noise and was worked. While listening around the band, TF/DL3GCS popped up. I quickly worked him for a new grid on Iceland, HP93. Around 22z, the band showed yet again signs across the pond. N3DB was worked in FM18 and I worked another 8 stations, 4 of them that I hadn't worked before. The band was open for maybe 45 minutes, but the signals were mostly weak, and I couldn't hear anything other than stations situated at the east-coast. I then turned of the radio and went to bed.

If you look at the picture, you see the openings. I couldn't get all of the callsigns to show on the picture, but you get the idea.