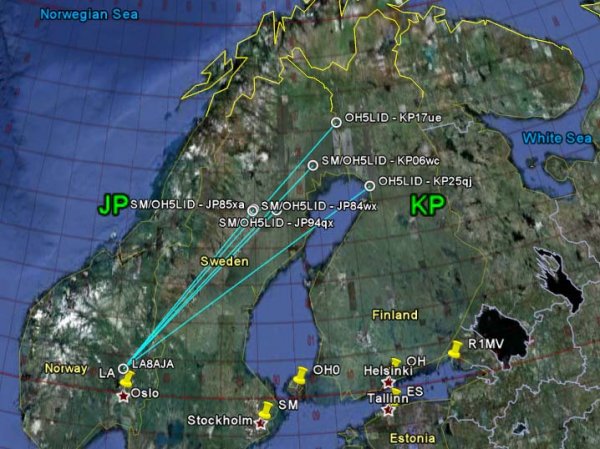 After the A4 opening I reported about in the last post, I didn't work anything until June 8th. Janne OH5LID had planned a trip to activate several squares on 4M and 6M. I was lucky enough to work him on JT6M on June 8th from KP17. That was my first new grid thanks to Janne.

June 10th gave me 2 x 4X stations and SM/OH5LID in KP06 for my second new grid. The muf increased to the point that 2M suddenly opened. I don't have a yagi up, but I connected my vertical and managed to work OE3FVU JN78 And HA1FV JN87 on 2M SSB. JN87 was a new grid for me.

I only worked one 6M qso on June 12th, and guess who, Janne again! SM/OH5LID was worked from JP84. In only a few days, Janne managed to give me 5 new grids on 6M. Thank you very much for the expedition and the great job you did!

I finished Janne's trip on June 13th with OH5LID in KP25 on 6M. That wasn't a new grid, but I had only worked it once before.

Janne was in fact quite easy to work from all locations, however I didn't expect to work him from all those grids. Read about Janne's trip here. You might also want to see the most wanted grids on VHF/UHF or even submit your needed grids here.