DX on the Magic Band 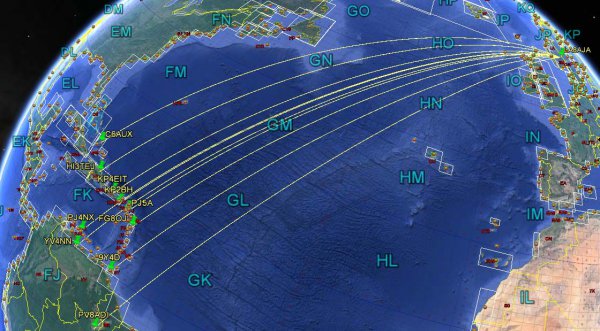 Since my last 6M post, we have had a few openings on 6M, but I can’t really say I’ve heard much of interest during several of those openings. However a few openings are worth mentioning.

On June 22nd, TJ3SN was in with a good singnal. Better than when I worked him in May. He had a good pile-up, and I know he was worked from Norway. In the evening, we had a big aurora. Well, for me most of it went south of me. I heard a few stations, but nothing I hadn’t worked before. I also had a lot of whitenoise in the direction of the sun that evening. Probably from the same stuff that caused the aurora. The aurora also turned into some auroral-e and I worked EI6JK and EI4DQ just for the fun of it. The K index was 9 over many hours.

During the morning on June 23rd, North-America was still enjoying auroral-e. On the ON4KST chat K1TOL suggested us to give it a try. He started cq’ing, and after a little while, I heard him. The tone was not pure, more like an aurora signal, but not so wide. I called him, but the conditions disappeared before we could make a qso. I did not even think of making a soundclip at the time. It would have been fun to have this as a recording.

On June 26th, I heard UK8OM and UN7TW to the east. I have worked them before, so I didn’t bother calling them. 9K2MU was cqing with few takers, so I gave him a call. I don’t hear 9K too often here, so it was nice to hear him with a good signal. In the evening, PV8ADI appeared out of nowhere. I worked him for a nice dx.

Little did I know that June 27th would turn into one of the best openings since the days of F2. During the day, I caught UN7AM in LN53 for a new grid. I didn’t work anything more until the evening. My rig was parked on 50103, listening for PJ5A. I missed PJ6D when they were active in 2011. They never copied me.

Seeing that more and more europeans were hearing PJ5A, I thought I could hear something very weak on the frequency. After a while, they appeared with a readable signal. My heart started pumping rapidly, and I started calling them. I could not break the pile-up at first, and thought I would miss them. Luckily, I managed to work them after a few minutes, and that was #147 on 6M. It was also an LA first on 6M.

The evening wasn’t done though. Other signals started to appear. And all out of nowhere, I heard C6AUX. I have worked C6 during F2, but this was a new iota and a new grid. After a few calls, I worked him.

HI3TEJ was heard calling with very few takers, so I gave him a call and worked him. KP2BH was also worked. And a little later, FG8OJ was worked with a new signal. I only worked FG8OJ, so that I could get the contact on LoTW.

And if that wasn’t enough, PJ5A was heard for several hours. It’s quite strange that some signals only last for minutes or less, and some are in for hours.

An opening like this, is what makes listening to all the whitenoise worth it. I just wish we had more of these openings.

Peter JW7QIA came on the air again on June 28th. That same evening, he worked several stations in Scandinavia. I heard him here, as usual. On June 29th, he did also work some stations in Scandinavia, but the big opening came on June 30th. He did copy KL7KY, but no two-way qso was made. A few hours later, he got an opening to the USA and Bahamas. Peter worked C6AUX for a JW-C6 first on 6M. In the evening, he had a go to Japan. He did copy JL8GFB for a few seconds, but no qso were made. On July 1st, Peter got another opening to North-America. This time he worked both USA and Canada.