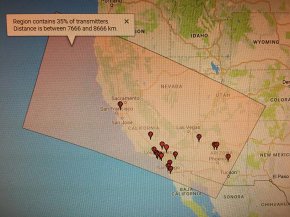 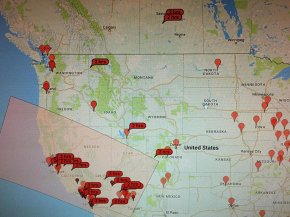 It was July 4th. I was out cutting the gras. When I was finished, I had gotten a message from LA7QIA wondering if he should be home now.
As I had been outside, I didn’t really understand what he meant. I started checking things and noticed LA-stations were reporting hearing
stations from the west coast on 6M on JT65. I quickly ran to my station and turned everything on. On my first decode the frequency
were quite active with loud stations coming in.

I quickly started calling CQ, hoping to work a few stations. The first station in the log was NA6L. He was quickly followed by K7JA.
I noticed at the same time that I was hearing XE2CQ very strong. I have never heard Mexico on 6M, and I know only a few LA’s worked into Mexico during the F2-days several years ago. Luckily I managed to work him for #151 on 6M. That was something I had only dreamt about until this day, and it was also a new waz at the same time.

The opening continued on and I logged KR7O, K7JE, AA7A (WAS #41), KF2T (WAS #42), N7CW, N6RW, AI1K and finally N6ML. The opening lasted from 1710z until 1803z. I know I was being heard several places, but I couldn’t hear any stations at all. I can’t say why, and I don’t think my noiselevel was that high. K7ULS heard me in Utah, but I could never copy him. That would have been a new state. N6SPP even reported hearing me on a dipole 3M above ground. W7MEM heard me in Idaho, and I did notice that VE5UF had heard me as well.

This was the first time I worked into the west coast. I managed to work New Mexico a few years back, but I never made it any further. I know a few other LA’s did work all the way to the west coast.

The pictures are from pskreporter. The first are stations I heard, and the second are stations that heard me. I hope I’ll get one opening like this again.