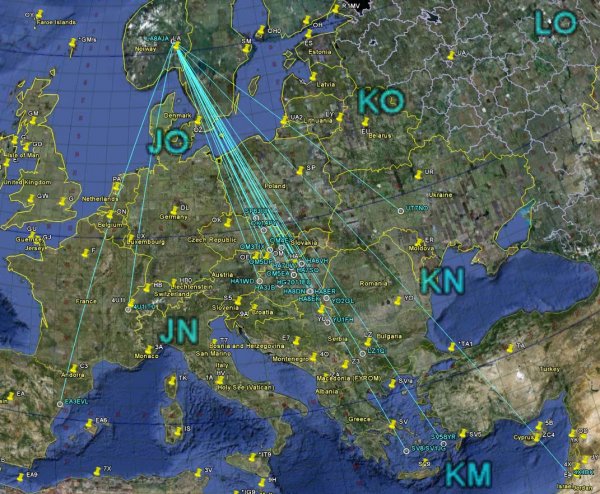 After the big opening on May 21st, the following day was more of a disappointment. The band was open to the east, but no stations were heard. The only sign of life to the east was 2 x OH and 1 x YL stations in the log.

Monday May 23rd was also not very good. I worked 14 stations in I, DL and OK. Nothing new and nothing exotic about that opening.

May 26th however was more to my taste. The band was open to the south-east. 4X4DK was the first station I worked. Many stations were on, but I didn't bother to work anything. The squares or the stations were already in my log. SV5BYR Mike was worked on SSB. That was the first time I worked him on SSB. I've worked him twice on CW before. SV8/SV1JG in KM26 was worked for a new gridsquare. I started calling and worked several stations in HA, OM, LZ, YO, UT and YU. I was monitoring the band for new gridsquares and one of the needed ones were EA3EVL in JN00. I was watching his frequency on and off during the opening. After hearing nothing the whole time, the signal suddenly came through and we worked easily. That was my second new gridsquare in this opening and JP50 was also a new one for him. I finished the opening with 4U1ITU in the log. I could easily have worked a lot more, but I also tried to listen around for anything new.

« 6M opening May 21st
Big 6M aurora opening and 2 new grids worked »
Comments: No comment yet, you could be the first