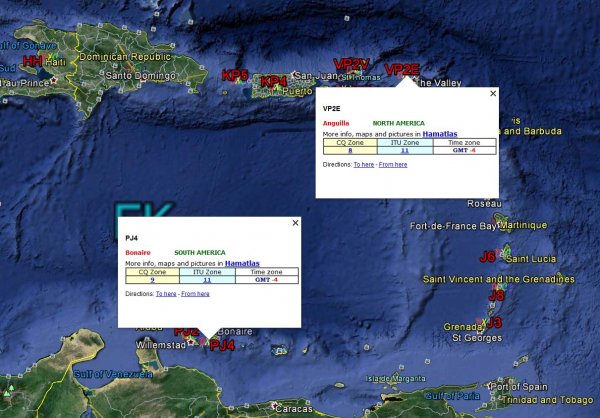 I worked some more contacts on 6M since my last report. On June 17th we had a nice opening. One of the contacts was with US7QQ in KN76, which was a new square for me. I also gave FM5WD a call in the evening. He had a nice signal.

June 19th had another opening and I worked UN3M in LO61 for a new square a field. I did also work TK5JJ and TK5EP.

June 20th was the day for me. I was listening around a lot but I didn't hear anything interesting until suddenly PJ4NX showed up calling on CW. I managed to work him for a new one on 6. A few hours later I could finally hear VP2ETE calling cq on ssb. I got him quickly in the log for my second new one that evening.

On June 24th we had some aurora and I worked a few contacts. A few hours after the aurora, the band opened to northern Norway. LA9VFA had a strong signal from KQ40 and gave me a new square.

The band was pretty much dead for a few days until June 28th where I worked yet another aurora. I got called by LA6OJ in JO38 for a new square. Peter JW7QIA was worked later in the evening on auroral-e. He is always easy to work when he activates JQ68.

June 29th had a pretty good opening, but I didn't bother to work too much. The only thing I worked, was UU6JJ in KN75 for a new square.

During these openings I have also heard A4, A9, FG and KP4, but I didn't bother to work them as they are already in my log.

« #315 on LoTW with T88AT
DX update and iota-chasing »
Comments: No comment yet, you could be the first